The Things I Carried

This post is to talk about the things that rode with me on the scooter.  I want to emphasize that what follows is simply how I managed things on my scooter, with my limited experience.  There are lots of folks out there who have spent years developing their “kit” and are anxious to share what they’ve learned.  I did my best to utilize their knowledge as I prepared for my own ride.  The test rides I did as preparation for the trip were very helpful, although I made some big changes during the first week of the trip and smaller ones on-going that contributed to my enjoyment of the ride.  So, front to back…

Blue Bag under the front rack:
This was a 20-plus year old SealLine 20 liter dry bag that contained my clothes, shaving kit, chargers for all the electrical devices and a plastic bag that was the equivalent of your “junk drawer” at home.  The Blue Bag started out the trip behind the leg shield, but on Day 7 got moved to the front rack.  It’s contents were not expensive but were things I needed to access on a daily basis.  So it stayed on the scooter during the day, even when I was away from it, and came into the motel with me at night.  In the “junk drawer,” within their own sub-compartments were a couple of survival blankets, hand warmers, insect repellent, sugar and tea and spare plastic bags.

Gasoline:
I am very glad that I carried two gallons of spare fuel.  I used it frequently, sometimes because I needed to and sometimes because it was more convenient than stopping at a service station.  In any case, it always brought me peace of mind.  While it is possible to plan a route that doesn’t require spare gas, I didn’t want fuel to be the determining factor in what road or byway I chose to explore.  Until just a few days before the trip started I had planned to use the one-liter red cylinder under the top case as my only spare gas.  Happily, a couple of people at the Modern Vespa web site changed my mind.
Not all fuel cans are created equal.  I started out the trip with a “no-spill” container from Ace Hardware.  It may work for a lawn mower, but on my scooter it spilled gas every time.  In Cody, Wyoming I switched to a less-expensive gas can from Wal-Mart and had only one spill during the remaining 53 days of the trip.  Plus, the spout on the Wall-Mart can could be stored within the can, instead of always sticking out.  It’s interesting how small things can bring us joy.

Glove Compartment in the leg shield:
In this small lockable space I kept my passport, a hard disk drive for digital photo back-ups, spare glasses, and insurance and registration paperwork for the scooter.

Black and White Bags behind the leg shield:
The Black Bag is a two-person tent and the White Waterproof Bag contains a sleeping bag and a mattress.  They sit on an after-market floor rack from Classic Racks, and are held secure by two Rok-Straps.  The White Bag was another of the Day 7 Wall-Mart purchases.  It allowed me to re-distribute items amongst the packages and to re-locate the Blue Bag to the front rack.  Life became much easier after that.
More than any of the other items, the Black Bag and White Bag gave the scooter the appearance of being over-burdened and inconvenient to ride.  In actual practice they were not at all inconvenient.  The two bags were lightweight, did not interfere with positioning of my lower legs or feet, and in fact helped keep my legs and feet warm in cold or wet weather by minimizing their exposure to air turbulence.
I only camped twice during the trip.  The first time was a planned camping event at Craters of the Moon National Monument in Idaho.  The very next night I had planned to stay at an undetermined motel in Jackson, Wyoming, but the motels were all full, and the camping gear was what came between me and a cold homeless night.  The camping gear wasn’t used again the rest of the trip, but it brought me peace of mind, allowed me to be a bit cavalier about planning my daily route and destination, and I was always glad I had it along.  Without the camping gear, a mechanical failure on some of the roads and in some of the conditions I traveled could have been life-threatening rather than merely inconvenient.

A Note Regarding Camping:
Before the trip started I imagined that some nights on the road would be spent at a campsite picnic table happily tapping away at my blog while enjoying the serenity of the great outdoors.  What my fantasy omitted was the lack of internet connectivity, cold wind and the fact that I couldn’t download my photos or type in the dark.  So early on I decided that it was either camp or blog, and blog won.

Black Seat Cushion:
The Black Seat Cushion you see in all the pictures is the modification of an AirHawk Model R.  I could ride all day long on it in perfect comfort.  But don’t go out and buy one just yet.  If you’re interested in the subject, read on… 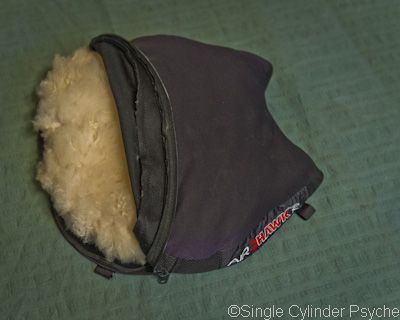 I’m actually fairly happy with the stock Vespa seat, but my body dimensions place me on the downward slope of that seat, midway between the rider and passenger placements, so that I feel like I’m sliding down an incline.  Two or three hours of this is OK, but all day, day after day, might be too much.  So before the trip I explored the many options.  To make a long story not as short as you’d like, I settled on the popular AirHawk brand as the cushion most likely to please me.  It has an inflatable multi-cell air bladder inserted into a fabric cover.  First I bought and tried out an AirHawk Model DS.  It was small and lumpy, so I returned it.  Then I bought and tried the AirHawk Model R.  It was big and lumpy.  I was about to return it and be happy with the stock seat, when I decided to try placing a piece of sheepskin over the air bladder, within the cloth cover.  Violà!  Now I could be happy.  The moral of this story is that what worked well for others did not work for me, and what pleases me may not satisfy you…a lesson applicable to both seat covers and life.

Black Stuff Sack strapped to the seat:
This Black Stuff Sack strapped to the back of the seat contained the scooter cover and my rain gear.  There was extra room in this sack so sometimes I’d add in an item like a layer of clothing I no longer needed for the day.  Also under these straps is where I’d  keep my fleece jacket if I wasn’t wearing it.  A very important aspect of this arrangement (to Vespa owners) was that the straps were attached to the seat (by way of aftermarket Aerostich hooks) rather than to the rails, so that the seat could be opened to re-fuel the scooter without removing and replacing the straps.

A Note Regarding the Scooter Cover:
I always covered the scooter at night, both to protect the scooter from the weather and as a mild security measure.  Most of the nights I secured the cover with a 3/16″ cable lock.  After about a week into the trip, except in Philadelphia, I left the camping bags on the scooter overnight.  Nothing was ever taken from the scooter.

Under-Seat Storage:
The Under-Seat Storage is where I kept the heavy stuff like tools and spare parts, plus my riding gloves.  I generally didn’t need to access these items during the day, except to change gloves.  Here’s a picture of it all spread out… 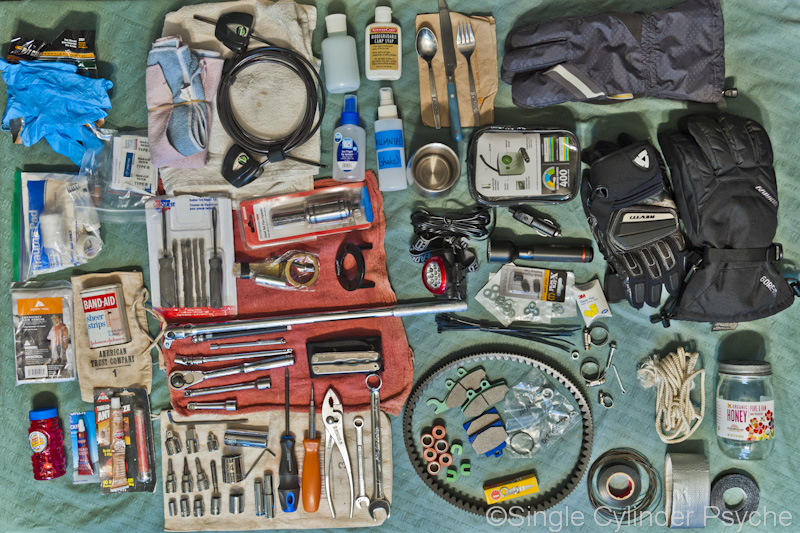 This picture should be adjusted by the elimination of one pair of gloves that would be on my hands and the addition of a 20 oz. aluminum water bottle that was kept in the Under-Seat Storage.  The one package of earplugs shown is to represent the 25 pairs I started out with and the 20 pair replenishment along the way.  Most of the items shown in the picture were packaged in some manner and not free-floating in the storage space.  The silver thing below the spoon is an insulated aluminum drinking cup.  The four bottles in a group are cleansers of some sort.  The only other things that may not be discernible are an air mattress patch kit and first aid kit in plastic bags, and a red bottle of Super Miracle Bubbles given to me by Sister-in-Law Vicky in case a tire developed a leak that I needed to locate.
I don’t think it is a benefit to list all of the specific tools, as different scooters have different tool requirements.  It’s probably enough to say that the tools are those necessary to remove either wheel, change the oil, replace the spark plug, change the belt, rollers and shoes in the CVT, remove the windshield and take apart the steering headset.  With the exception of the tire plug kit, I used all the tools I took plus some I purchased along the way (12V air pump, 1/2″ breaker bar, 1/4″ sockets and extension for the exhaust manifold, and magnetic tipped phillips screw driver).
The spare parts I used were rollers and shoes for the CVT, spark plug, an exhaust gasket and oil filters(2).  Twice the headlamp low beam burned out and was replaced with something I purchased along the way.  I think the off-road side trips I took may have shaken the headlamp filaments too much.
The front tire was replaced just before the trip started.  At the finish of the 10,015 miles it had 3K to 4K miles of tread left.  The rear tire, which I had planned to replace in Minnesota after about 4,400 miles of use, blew out with lots of tread left at 4,200 miles.  Its replacement finished the trip with 7,400 miles on it, and the wear bars aren’t yet showing (but close).

Top Case:
The Top Case was mostly for my laptop computer and camera bag.  I would also put incidentals in there for easy access or temporary storage, like a layer of clothes.  Here’s a picture of the camera bag… 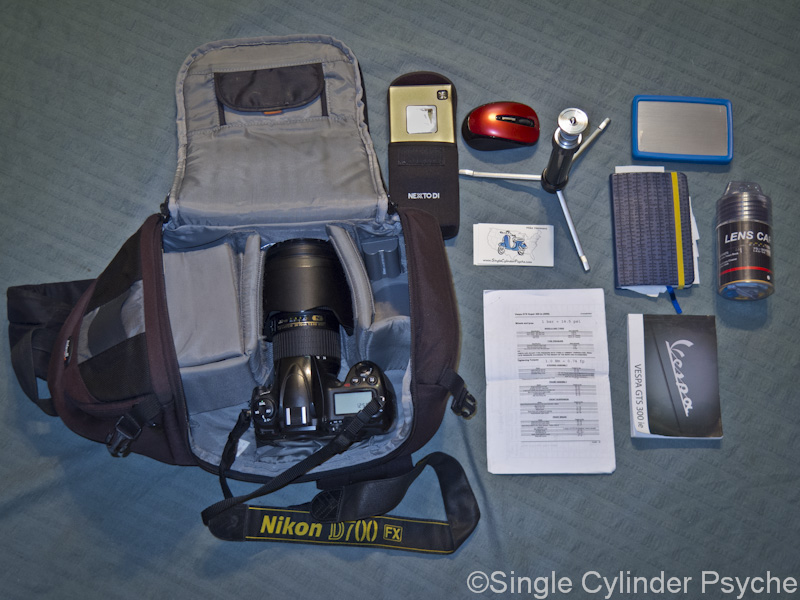 Within the camera bag was a Mini iPad (not shown), lens cleaning kit, small tripod (not used much), my paper notebook, “business” cards, the gold Nexto hard drive (the blue drive was actually kept in the glove compartment), Vespa Owner’s Manual, list of torque settings, and other small items.  The camera bag always went with me whenever I left the scooter.

“Business” Cards:
I brought along some of these to give to people I met if they seemed interested in the trip.  It was easier than writing the blog address down on whatever scrap of paper might be available, and it was the closest thing I had to a gift that I could give them to memorialize our meeting.  My hope was that they might check in on the blog and may-be contact me.  Some of them did, and I liked that. 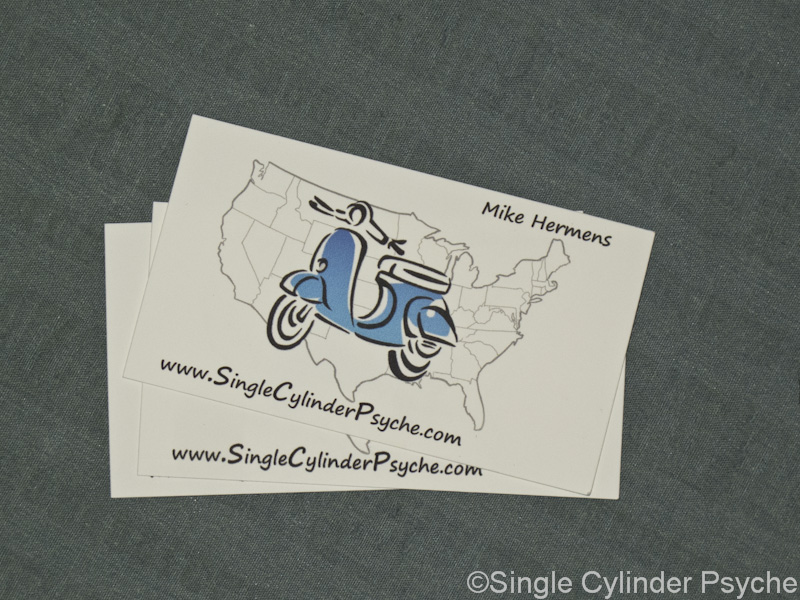 That’s all I can think of right now, and probably lots more than you wanted to know.  You’ll hear from me again in the Epilogue post.  Take Care.